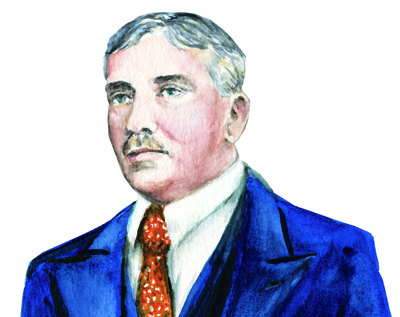 Hello and welcome to Batiscan!

My name is William-Pierre Grant. Have you ever heard about me ? No ? Yet, I played an important part in the industrial and political scene in Batiscan and in Quebec. Let me tell you all about it.

I was born in Saint-François-Xavier de Chicoutimi on June 3, 1872. I am the son of William Grant, merchant and negotiator, and of Emma Caron. Why have I spent most of my life in Mauricie ? Because after my studies at the Seminaire de Rimouski, I went on studying at the Académie La Salle in Trois-Rivières and fell in love with this majestic region of lakes and rivers. I was right, don’t you think?

Like many people my age, I focused on the thriving pulp and paper industry. I was first hired as clerk in Trois-Rivières for the St-Maurice Lumber that also owned a sawmill in Batiscan since 1898. When it became the C.I.P. (International Paper Company), I was appointed manager in 1911. I was running the Batiscan sawmill. Those were great years for me! Yet, I am better known for my political past than for my stewardship at the C.I.P. I was elected as a Liberal deputy in 1925 at by-elections in Champlain and was re-elected in 1927 and 1931. I did not run in 1936, having been appointed registrar of the same county in 1935 and until I died. What an honor!

Politics were a popular topic in my family and table conversations were lively. Of course, my brothers-in-law Néré Le-Noblet Duplessis and Richard-Stanislas Cooke were no stranger to this. Even my nephew by marriage, Maurice Le Noblet Duplessis, had embarked on politics and ended up making history. Everyone knows him and his famous National Union ! In elections, we had such divergent views that we ended up not talking for quite a while.

These quarrels are now a thing of the past, and when I look at what became of my beautiful municipality of Batiscan, I can’t help but feel proud. It was named flagship of Quebec for a reason ! The street that runs along the Batiscan River was even named International Street, in memory of the sawmill that employed me for many years. At no. 100, the house where I lived until I died still exists. I died on August 25, 1943. I was 71 years old. I was even buried in the parish cemetery. So there's still a little bit of William-Pierre Grant, here in Batiscan.