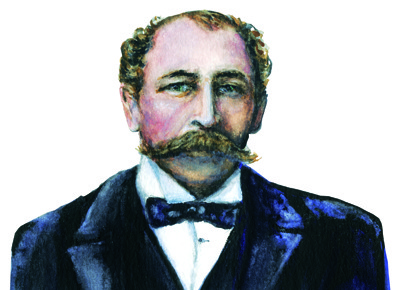 Ah! Sainte-Anne-de-la-Perade! I have accomplished so much here! My name is Jeffrey-Alexandre Rousseau. Let me tell you my story.

I was born in 1852 in the seigniory of Sainte-Anne-de-la-Pérade. I am descended from a line of merchants and soldiers. So it’s no surprise that after a few school years, I joined the Canadian militia to defend my homeland in the Fenian War. I was Captain, then Major, to finally be named Honourable Lieutenant-Colonel by Sir Wilfrid Laurier himself.

Still, that military past is only the tip of the iceberg of all my achievements. After 8 years spent selling insurance policies on the north shore of the river to Montreal, I discovered the comfortable life of the English-speaking middle-class Montrealers, and it gave me ideas… I then promised myself that one I day I would manage my own empire. To get there, I needed to acquire knowledge. So while working on a day job, I took evening classes: English fluency, accounting, especially in the banking system, speech, decency, politeness, etc., as well as English dining manners and dress codes.

I returned home in 1879 and began buying businesses: match factory, shop, sawmills, cutting sites, farms, gloves, and many others. In 1895, I bought the Jacques-Cartier Bank’s peradian branch, and founded J.A.Rousseau, bankers. This is where I managed my own empire, my kingdom. I am a company builder.

I have always been perceived as a rich and powerful man. I worked with important people such as the Price Family, Honoré Mercier, Sir Wilfrid Laurier, to name a few. Maybe that’s why I was elected mayor of my municipality for over 15 years and a member of Parliament for the Liberal Party for seven years. One of my wishes was to get my parish out of its seigniorial past and to lead it into modernity.

After I died in 1927, it seems that I was forgotten. Was it because of the inheritance saga to recover my million-dollar fortune? Was it because of the Great Depression that plunged my parish into the Grande Noirceur two years after my death? It doesn’t matter. In 2002, just after my biography was published, they named the bridge crossing our river after me and I am honoured. Thank you all for reviving the memory of the self-made man I was.