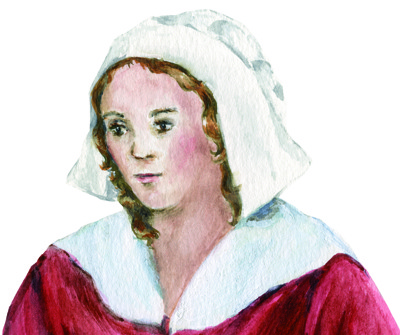 Do you see this majestic river? I travelled all the way here on that river with my four sisters, our father, Bon, and our mother, Marie Vienot, in 1671. He made the trip to try and take advantage of the tanneries development promised by the minister. My father brought with him more than four generations of know-how in this matter. He knew what he was doing, I’m telling you! My name is Marie Raclot and here is my little story.

I don’t want to brag, but it took a lot of courage to face uncertain seas and leave our homeland, Champagne. But us Raclot have a real sense of adventure in our blood. So it’s no coincidence if only a few months upon arriving, I married a farmer and traveler named Rene Baudouin and shared beautiful adventures with him for about 25 years. After all, tannery rhymes with fur trades. Tattletales will tell you that my 1000 pounds dowry added to a royal dowry of 100 pounds, a considerable sum at the time, made me a good prospective partner. But I still believe that Rene chose me for my tenacity and resourcefulness. His faith in me was so great that he gave me general power of attorney in 1682 so that I could manage his business while he was away. With our seven children and the many lands we had acquired over time, let’s just say that I kept busy!

Two of my sisters also had thrilling lives here, in New France. Françoise, the eldest of the family, married Michel David and embraced the beautiful career of midwife in Trois-Rivieres. But it is probably Madeleine who had the most eventful life through her marriage with Nicolas Perrot, adventurer and captain on the coast of Bécancour. Maybe it's because she was worried sick about her husband, but the poor girl lived four years of dementia before she passed away in 1724. Fortunately, I did not witness this sad spectacle since I was dead by the end of the 17th century.

The Beaudoin lineage is now deeply rooted in Champlain, and in the whole province of Quebec. I like to believe that there is a part of me, Marie Raclot, flowing in the veins of present generations and others to come.